Party has over XD (I hope you know what I mean) *cough* Music Day has over and it was superb~!
Especially the Johnny Collaboration with Arashi FEAT YOU. OMG~! Playing that game in real time is so fun and I hope we can do it again. Who knows, during Kouhaku?? hehehe imma waiting for it to happen ^^

This time, I managed to sub only Ohno and Aiba cut. Blame procrastination not me. I know nothing *innocent face* But then it's really  is my fault for losing to procrastination *sigh*
My break is about to over. Well actually it's the last day of my break.

Enough with my blabbering. Let's move on to the main topic ~

Gomen, this time there is no streaming video
P/s: Sorry for didn't manage to sub the whole episode eventhough I'm very determined to do that. But some of the Matsujun and Sho part is really hard to be well translated. Gomenasai *run away*

WARNING: Our translations are not 100% accurate, and Japanese and English are not my native language ><

Posting another short clip while waiting for

ultimatedbz to finish editing my work. Poor her. I'm sure my translation is too horrible making her having a headache. I'm sorry >< *bow* 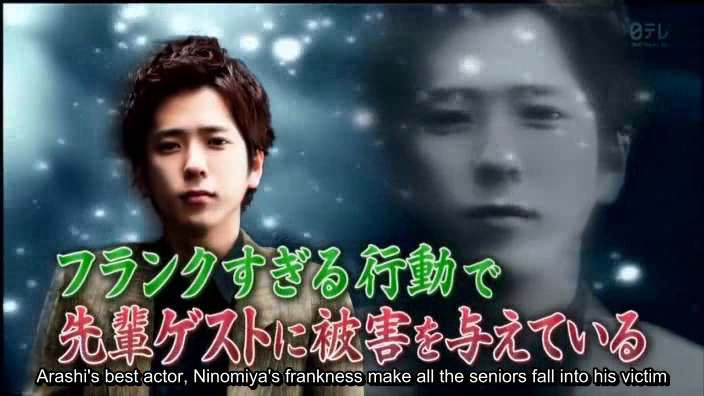 I'm sorry. This time, I only subs certain part because I'm not sure with my translation. Like I said previously, I learn Japanese by myself. But then, I'm trying to subs the other members part also. Just it will take time. I'm not planning to sub the whole thing due to 2 reasons
1. Is because I'm new to this subbing process especially subbing variety video, so my translation is not accurate. Japanese and English are not my native language.
2. Is I just realize that my breaks is about to over soon so I think I don't have enough time to finish subbing it. Procrastination is my middle name. Fuhu ^^

( Collapse )
I ask for everyone's kindness of NOT REUPLOADING IT, DO NOT STREAM IT TO ANY STREAMING WEBSITES AND SOLD IT.
I hope everyone do follow the sacred rules of this fandom ^^

First of all, allow me to brag first about my fresh from the oven wallpaper. I know that it's not really good and the amateurish feels,
but I still like it. It's more organize. haha I have a little bit of OCD attitude when it comes to technology related especially when it involves with my desktop. 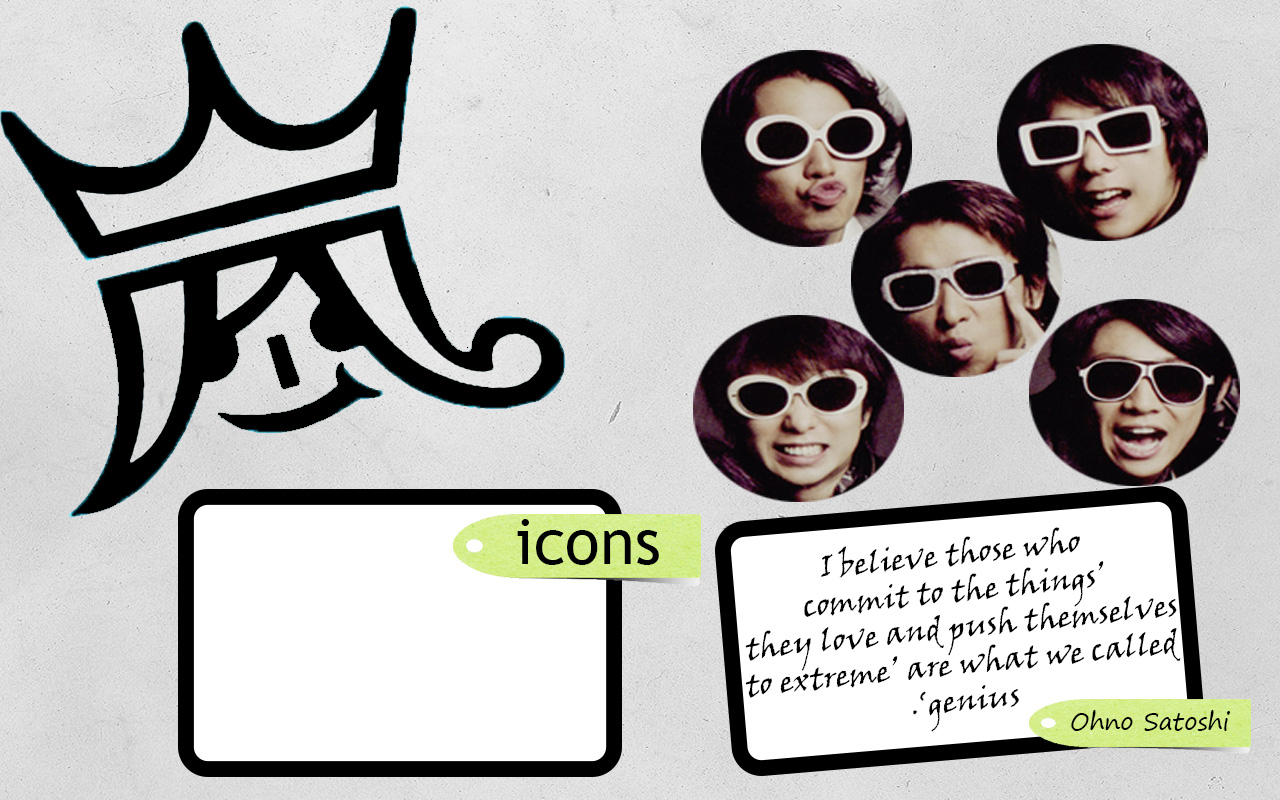 Secondly, Arafes voting is open~!!! The dateline for the voting is July21st. To vote, you need smartphones, and also Johnny web apps but you can manually use your browser. It's just that you have to on your javascript something.
Please think carefully of what you want to vote, and I'm sorry to say this. I really really hope there will be no "Love so Sweet".
Monochrome and Full of Love would be fine ^^

Enough of the spam thing. Now I would like to ask for a help.

I'm searching for an encoder who would turn my softsubs to the hardsubs. There's something wrong with my virtual dub. I think I accidentally deleted certain codec (which I don't know what and how to install it back) when I'm cleaning up my laptop.

I don't mind about your work experience. As long as you're an Arashi fan and willing to work with me. I have lots of work in progress right now, but I'm stuck with the encoding part. Once I found an encoder, I can move on to the next video to be translated. Take note that all of it will be Himitsu no Arashi-chan (my fav show ^^)

The video are in editing part. Thanks to

ultimatedbz for willing to edit my amateurish work^^

For those who would like to help, just PM me, anytime you want. I'm really DESPERATE in searching an encoder or else I can't release the episode that I'm working right now ^^; 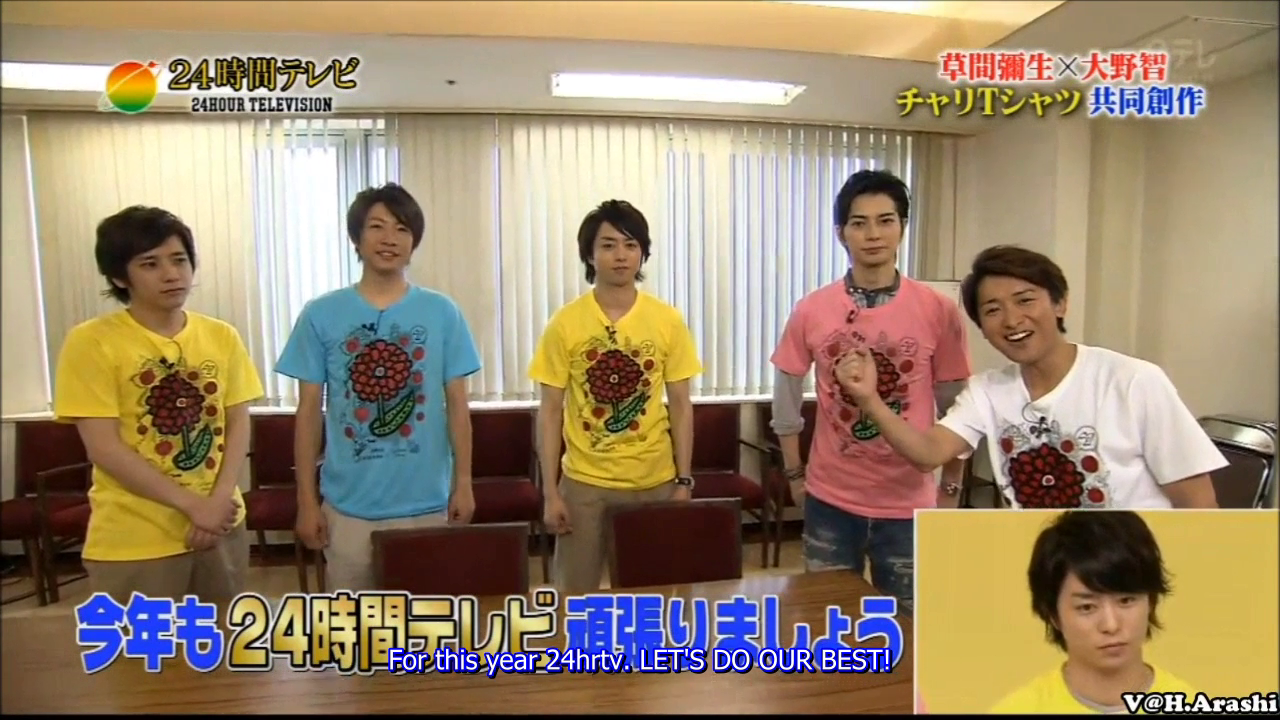 Have you watch the press cons yesterday? The chariT-shirt is so kawaii and
I think the white one is prettiest.
Since I'm in love with the design as its really fashionable, so I subbed this part only.
Reasons why I don't sub the whole episode are because :
1. I'm not an expert. I'm not very good in Japanese so some of their conversation can't be interpreted by me.
2. I'm too lazy as its make my head spin around. (I leave the rest for the fansubbers ^^)

p/s: sorry for inaccurate translation as I rely on my own japanese which I learn by myself.
and comments are appreciated~ ^^ 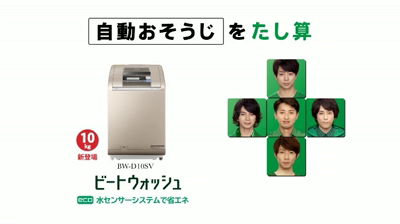 video credit: SoL (thanks for allowing me to use the video)

Translation note: this is my firs time subbing this kind of video. So I'm sorry for the mistake as I 100% fully rely on my own japanese which I learn by myself. The last part I didn't sub it because I don't know how to make literal translation to make is sensible. Comments are appreciated. ^^ 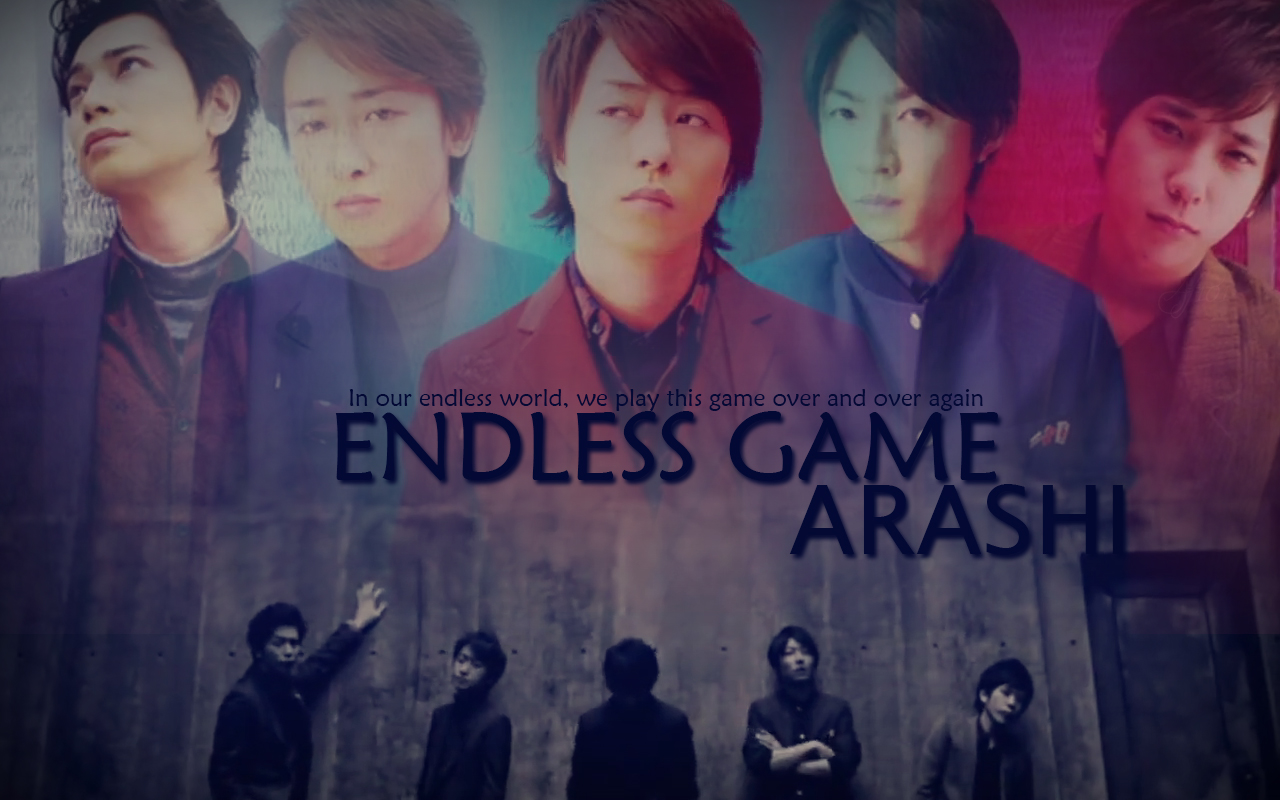 Make this wallpaper because I was plainly bored that time. I want to share it to you all (it's not that anyone wants it)
I know it's quite hideous. I'm not good with editing. It's been a long time ago and my skills are rotten already.
Now, I'm trying to polish my skills and create another one ^^

Konichiwa. Yesterday is the 2nd episode of Kazoku Game~ Woho!!!! And I heard this rating is more than 10%. I hope it will increase since Sho’s acting is so good. (I heard also that the director said Sakurai can act well because there is Yoshimoto inside him) *shiver* Enough the babbling and let’s proceed with the drama :D

video credit: Miyase-files (I only downloaded it)

It’s been almost two weeks, he hasn’t met his lover. He misses the sweet voice that always struck his heart whenever his lover called his name. He miss how his lover’s hands brush his lips whenever there were bits of foods attached on his lips. He misses the warmness of his lover’s body whenever he embraces him. During night and day.
Now, he was left alone in his own house, accompany by the droplet sound of the rain.

“It’s going to be cold tonight.”

Unconsciously, he grabbed his phone and typed:

Tonight is going to be cold. Please sleep on your bed and don’t forget to use blanket.
-Sho-
He smiled at the text knowing that Satoshi might forget that it’s raining. This person has no sense of awareness when it comes to drawing. After a few minutes, a message came into his phone. Knowing the sender, it showers the seeds of happiness in Sho’s heart and makes it bloom beautifully.

I understand. I’m sorry, Sho-chan, for making you worry. You also shouldn’t forget. Don’t get naked without me around :P. Let’s have lunch tomorrow. I won’t accept “No” as an answer.
Aishiteru. Oyasumi <3
-Satoshi-
“Baka Ossan!”

He blushed. Despite the short text, but it contained the deep meaning. He remember how he fallen so hard towards Ohno, how he want to embrace the small figure in front of him that time.

The first time Sho saw Ohno, the times stop. Another person inside of him whispered, He’s the one. The jewel of your heart. At first, he doesn’t want to believe it.  He thought that person is just a normal wind. Act merely as a passerby where everyone will forget about him after he passed by. But he’s wrong. Satoshi is not just a wind. He is the light of wind. The one that bring forth the happiness to the people around him. Whenever the wind blew, everyone is delighted as it bestow the relieve feeling  towards people. Everyone feels at ease whenever he beside them.

”its stop,” The rain has stop and Sho looks towards the night sky. After the rain, when the cloud starts to clear. It was the most beautiful moment. The moon shines brightly due to the reflection of light. Not only that, the night sky was illuminated by shiny stars. It’s like diamonds.

“I wonder if Satoshi is looking at it also. I wonder what he’s doing right now.”

Well, Sho has a rough idea, he sure that his Satoshi is immersing himself in the world of arts. His clothes would be dirtied by paints while his fingers are busy changing the white landscape into breathtaking scenery with the help of brush and paint. Although, he was hoping that Satoshi would be with him tonight, but he rather see Satoshi being very happy with doing his hobby. Besides, he will have ample of time when Satoshi has done with his painting. And this means dirty things.

Sho thought of getting off to bed for good start of tomorrow, but for some unknown reason, he just can’t fall asleep.

“Maybe I should study the news,”

Being a typical Sho, he rushes towards the study room which can’t be considered as study room anymore. Sho is a messy person. One fact about him. Books stacked until reach his height. There were dirty clothes on the floor and the smell of it was quite awful. Sho just sighed when he looked at the room. He can’t do anything. Procastinating is his middle name. He keeps telling himself to clean this room but the fate never allows him to. Even his Satoshi can’t force him. Satoshi already give up in making Sho to clean his room.

“Urgh~,” Sho hesitantly pick up all the stuff on his floor and put it back where it’s belong to. It took ample time for Sho as he has mixed feelings.

Lazily and hesitantly picking up the books, he come across an old book that caused nostalgic feeling inside of him to bloom.

Puff. He blows all the dust resides on that book and opens the book that brings him to the past.

It’s a miracle... Sho can’t stop those words. For him, to be love by Satoshi is something he wished the most. Far from world peace, far from the world’s treasure.  Far from anything else.

Sho can’t control his feeling anymore. He needs to see him He needs to embrace him. Feel his warmth as he across this cold night.

Towards you who are dear to me, I began to row my boat. Portraying this miracle, I’ll go straight to where you are.

Sho start his engine and within second, he drives to Satoshi’s house. It took only half an hour for him to arrive. He can’t wait any longer.

“We’ll be together for the rest of our life. Until death do us apart,”
The vow they make. The vow that protect their love.

Satoshi is in there. He went to the door and opened. How shocked he was to see the figure that he loves the most.

“Satoshi, gomen,” out of the blue, Sho embraces him like there’s no tomorrow. H feels Satoshi’s

“It’s getting cold. You should spend a night here.”

Title: For You Part 3
Author:

reinared
Rating: PG-13
Pairing : Ohmiya, slight Aimiya.
Summary: The third part of this mini series.
Disclaimer: I don't own them, and sorry for my bad english.